Weeks ago, the Technological Institute of Aragon ITAINNOVA and the CIRCE Foundation attended the meeting of Spanish partners of the European Association of Research and Technology Organizations (EARTO), held in Madrid. 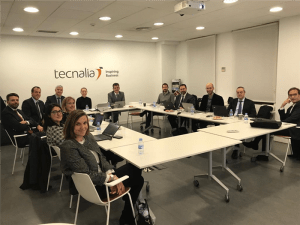 The meeting, which took place at the headquarters of Tecnalia, was attended by representatives of EARTO, AIMEN, ATIGA, CIRCE, EURECAT, FEDIT, IK4, INSPIRALIA, ITAINNOVA, LEITAT, TECNALIA and VICOMTECH. ATEKNEA, EDMA and ITENE were missing this appointment.

Muriel Attané, representing EARTO, was responsible for energizing the work session. He talked the Spanish members and Spanish participation in the Management Board. EARTO’s priorities for this year were one of the key points of the session as well as the actions on Horizon Europe and other activities carried out by this group that brings together 350 technology centers from 23 countries and has 150,000 researchers, engineers and technicians working in association with 100,000 companies a year.

In summary, the meeting served for those present to ask EARTO for greater feedback on the development of the working groups and try to seek greater involvement of the partners in the preparation of the “Position Papers”. On the other hand, it is demanded that the response times be longer, in order to better prepare the contributions and the possibility of translating some reports into Spanish, in order to distribute them internally. With all this, the possibility of adding some text adapted to the Spanish reality arose.

The meeting was positive and the representatives of the attending entities concluded that they should have more information about the activities that are being developed from EARTO and the formation of more meetings of the Spanish group to address current issues.